In 1847 Martin Feeney returns home to Ireland to find his mother and brother dead, his nieces and nephew about to be evicted, and death and starvation everywhere. And then the bailiffs shoot his nephew and his sister-in-law and her daughter freeze to death after their eviction. The only option open to Feeney is bloody revenge.

Feeney travels west leaving a trail of death, and witnessing the suffering and starvation of all the Irish.

I really wanted to like this film; it could be a great setting for a film. Unfortunately it does have that low-budget feel to it, and all the extras give off that “I’m acting” vibe. And then there is actor playing Feeney, I think he maybe watched a load of westerns or Rambo films and felt that silent and non responsive was the way to go. Unfortunately he really doesn’t have the charisma or presence to carry it off, and every time he appeared I felt he sucked a little bit more of the life out of the film.

I’m also not sure about some of the choices regarding how they shot the countryside. Sometimes it just looked false, but sometimes it did add to the feel of the film.

There was also an awful lot of exposition, and while I really love the fact that so much of the dialogue was in Irish, it did make some of that exposition feel even more drawn out. 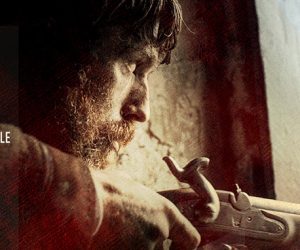 The parts of the story with Weaving and Fox seemed to become more and more central as the film went on, and they were the stronger actors, but if you are telling a story of revenge do you really want to position the bad guys so centrally?

The film also suffers because the situation really was that terrible, and the actions of the landlords, agents, etc., were so horrific that looking back they almost seem like cartoon villains their actions were so reprehensible. And yet I’m sure the same can be said about the actions of the monied and the powerful all over the world today.

And then there is the problem of history. Nothing that Feeney does can change anything, people continued to die and to emigrate, famines continued to happen and the English continued to “bring civilisation to the Irish”. His murders change nothing and so how can a viewer regard them as anything but futile.

But maybe that’s just my view of revenge films in general, sure you kill somebody1 but how does that help anything? The dead are still dead, and all you are left with is yet more dead. I’d love to see a film based on Marita Conlon-McKenna’s Under the hawthorn tree or another film that focuses more on the reality and less on the wish-fulfillment of this film.

Overall, I do think that Black 47 is worth a watch but as a film it doesn’t entirely work.