So, my thoughts on this rewatch are “wow, Stark is a dick, and no Pepper, his behaviour with women is not cool. Not cool at all. Also the little transphobic and homophobic jokes, so not cool.

But I still enjoyed it, and I agree with my past self about the importance of an American death v all those “foriegn” people. But I do think that this is something the Marvel Universe has moved away from in some ways, so that’s good. 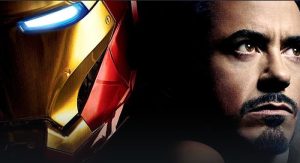 Original review from May 2008: Ever since Kiss Kiss, Bang Bang I’ve loved Robert Downey Jr. and that is the main reason I wanted to go see this film. Sure, I enjoy superhero films, but I know nothing at all about Iron Man, so it wasn’t any grá for that character that made me go. For those of you who share this non-knowledge Iron Man is Tony Stark, a genius of a weapons-dealer. When things go wrong for him in Afghanistan he ends up thinking that the only route forward is to give up the whole destruction business, obviously enough his share-holders object slightly.

I really enjoyed this film. It isn’t the greatest film ever made; not by a long shot. But it is entertaining, with some great effects, and some wonderful acting. Yes, I still love Robert Downey Jr..

However it isn’t perfect. And I think I may be getting old. Why else am I wondering why they spent so much time focusing on the possible death of one single US pilot when many, many, many other non-Americans have just been killed, and a few US soldiers too. And I’m sorry, but death by being burned alive is something I don’t think I can really think of as being cool.

But those are minor quibbles. This is a perfect popcorn flick. Finding fault at things like that is more than a little silly. It isn’t designed to make you think, not really, it is meant to entertain, and that it does. In buckets.