First read in December 2004, reread in July 2017. I loved this book when I first read it. And loved the tv adaptation that came out... 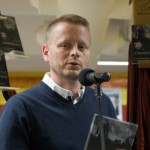 As you may remember, last year I came across a series of books by Patrick Ness, The Chaos Walking trilogy. Which I loved. They even made me cry they were so good. And when I spotted that he was going to write a book based on an idea by Siobhan Dowd I thought, oh, that sounds fascinating. And then I saw the cover, and thought “ooooohhh that looks veeeery interesting”.

Monsters of men by Patrick Ness

The good man Jesus and the scoundrel Christ by Philip Pullman

The back of the edition of this that I read has only the words: This is a story. Interesting. Is that because the publisher’s don’t want to offend the ultra religious in the Christian world. Or is it a message from the author that the life of Jesus is a story. That the bible is a story.

Pullman, of course, is known for his ever so slightly controversial views on religion, he has used them in his fiction before. In that case it involved a worn-out god, and power-hungry angels. Here he revisits the myth:”(is a myth a religion we dont believe in?)”: of Jesus Christ and weaves a new story out of it.

Whose body? by Dorothy L Sayers

The body of a stout man is found in a bathroom, naked but for a gold pince-nez. At the same time, a prominent banker goes missing. Is the dead man the missing Mr. Levy? And if so, how did he manage to end up in Mr. Thipps’ bathroom? And was he murdered?

This is the first book Sayers wrote to feature Lord Peter Wimsey. He is the second son of an ancient English house, his elder brother is the Duke of Denver. And his hobby is criminology. Already he has solved the case of some missing emeralds, now he is on two cases at once; to find the missing Levy & to figure out the who, why and where concerning the mystery body.