Ruth is a murderer. Seven months pregnant she believes her unborn child is telling her, forcing her, to murder people. She has her targets, arranges meetings or dresses up to entice them, and then murders them. She has to you see, her baby will kill her if she doesn’t.

I’ll admit that the title of this film did put me off a little. But it was one of Mark Kermode’s films of the week last year, so I thought I’d give it a chance. I’m glad I did because it is a very entertaining horror flick. Ruth is wonderfully played by the writer/director Lowe. She pretty much carries the film, everyone else is just there to be murdered. Well almost everyone…

The murders are gruesome enough to be horror, but this isn’t one of those torture-porn films, there is no camera lingering on pain and death. But if you don’t appreciate a bloody horror then this one isn’t for you.

Of course you could argue to is all a body-horror film. Pregnancy, if you think about it in a certain light, is horrific. Some other life form living and growing inside you, causing changes both physical and hormonal, making your body not you own. And Ruth even has her midwife tell her that her body isn’t hers anymore, the baby will tell her what’s right and what’s wrong. The baby will decide.

To me that’s pretty horrific even if the baby isn’t forcing you to murder people. 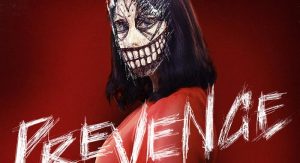 It isn’t all horror though, there are plenty of flashes of humour. Dark, of course, but they are there. And they certainly work to lighten the mood from time to time.

Prevenge is not going to rank as one of my all time favourites, but it is well told, well acted and well worth a watch.