In March I read 8 books, 2 by men (yearly total 7) and 6 by women (yearly total 16). 1 was a non-fiction title, 1 was a children’s picture book. And I’m finding it every difficult to pick just one to recommend. Mayhem by Sigrid Rausing was a fascinating look at the impact of drug addiction on a family. Ursula Vernon’s The Wonder Engine was wonderfully funny and entertaining. Alone in Berlin was an excellent novel about life in Nazi Germany and the oppression of every day life. The Bitter Twins by Jen Williams was another excellent epic fantasy adventure.

I think it’ll have to be Mayhem: a memoir by Sigrid Rausing, “A searingly powerful memoir about the impact of addiction on a family”. 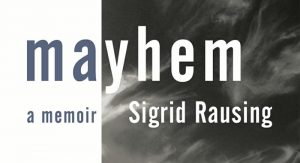 Filmwise I watched 17 films in March according to my Letterboxd diary, although I know I didn’t review them all. Of the new releases I’m torn between I, Tonya and Annihilation. Both of which were really good films, but I think I’m going to go with Annihilation as it the film I’ve thought about most since watching it.

What have you been reading and watching? What would you recommend I try in April?