Bees are pretty cool insects. They are also pretty damn important. Insects in general are essential to the world we know, so maybe think twice before spraying those insecticides and getting rid of all the dandelions in your lawn. We need insects1 so we should be paying more attention to their decline. 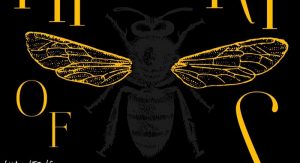 The importance of insects, bees in particular is at the heart of the plot of The History of Bees. Told through three different first person narrators in different times and places it imagines a future without bees and it really isn’t something to look forward to. Without insects to pollinate flowers don’t turn into fruits, food production halts, people starve and societies crumble. Tao’s story is set in the future, she is part of a group of people who pollinate trees by hand. Their days are long, the work hard and rewards few. The future is in doubt and she is constantly trying to improve her son’s chances by focusing on teaching him as much as possible. Even though he is only three she doesn’t see a future for him if he does not excel.

It is also the story of George, a beekeeper in Maine in 2007. He has always taken care of his bees carefully, doesn’t move them too far, builds them hives by hand, and yet the threat of Colony Collapse Disorder is there. No one knows what causes it, so nobody knows how to protect their bees from it. He is also dealing with the fact that he doesn’t know his son, he wants to hand the farm over to Tom at some stage, but Tom’s action suggest that maybe that isn’t what he wants.

The third storyline is that of William in England in the 1850s. He has been suffering from depression. His scientific hopes and dreams seem to have escaped him leaving him as just a shop-owner, father and husband. All his life he had wanted more, but he doesn’t see any way back into the scientific world until he begins to work on designing a new type of beehive.

Three very different people, stories, and times. But they all connect to the world of the bee, and they are all about people struggling with their place in the world, struggling with family and how to be a parent.

I really really enjoyed this book. It is about bees and the damage we are doing to the environment, how we need to see that we are part of a whole world and every action has consequences. And yet it is also very much about people and small details. Domestic and family life. It is wonderful.