I’m not quite sure how to start talking about Annihilation. I really liked it. But plot-wise anything I say to blurb it will sound either ridiculous or way too confusing.

So as little as possible then… a group of people investigate a strange phenomenon that nobody else has ever returned from. Inside “the shimmer” they encounter all sorts of weirdness. 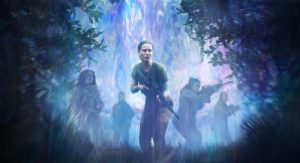 I’m guessing that description does not make you want to see this film. But you should, especially if you like science fiction films. And by sci-fi I mean films like Contact and Solaris rather than the sci-fi of Marvel’s superheroes, which I would probably really put under fantasy if I had to categorise them.1

It is slow, but builds wonderfully. And it is a pity that this was a Netflix only release over here because I think that visually it would have been stunning on the big screen. And the sound would also have been more impressive. It was still great on a smaller screen but a cinema viewing would certainly have added something.

It reminded me in some ways of Solaris2 and it’s theme of what makes a person, are we defined by our memories? by other people’s memories of us?

At the same time it is a very different film, full of body horror and a few scenes of full on violence.

I think it is one of those films that’ll stay with me, and although I’ve heard that the source material is very very different I think I’ll have to go read the book at some point as well.

Also it is pretty much an all-female cast, and yet all the characters are characters, in as much as they can be. It’s almost like the film sees women as people! Amazing.