17 Orchard Lane, in Bishopthorpe is a quiet, residential spot. Home to the respectable types; doctors and architects. You know that sort of *respectable* English street. But one of the families resident here is keeping a secret. A secret the parents are keeping even from their own teenage children. Clara and her older brother Rowan have always thought of themselves as different from the other kids. Pale, often sick, and often the victims of bullies. But the reason why is about to be revealed to them. Because on a night out Clara is accosted by a boy and her natural instincts take over, instincts that are natural not to humans but to vampires!

Don’t worry, that isn’t a spoiler, it tells you all about the vampire-ness of the book on the back cover. 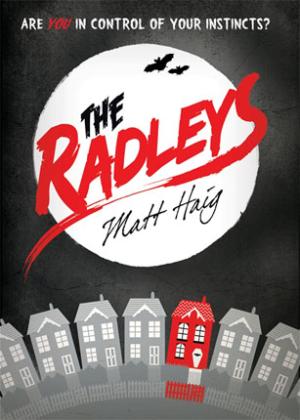 The Radleys by Matt Haig

This isn’t your usual vampire novel. Vampires here aren’t even immortal, they are stronger than humans and live longer, but the oldest reaches maybe 200 years of age. And they have a bargain with the police. Not all police officers know of them of course, those that do are part of the Unnamed Predator Unit, and they ensure that vampires are discreet in their habits. Vampires prefer vampire blood at any rate. Human blood isn’t half the vintage.

This is really a novel about life in suburbia. Repression and keeping up with the Joneses more than blood-soaked tales of vampirism. But don’t let that put you off, it is really good fun. Not laugh out loud, but full of humour and I really enjoyed it. It makes the usual lists of who famous vampires were; Byron, of course but there are others there.

It is a quick read, and I don’t think it’d make it in to many “absolute favourite” lists, but it is a good fun read. Recommended.