The sequel to Leviathan

No recapping on account of this being the second in a series, and if you haven’t read Leviathan then you’ll be spoiled, and I wouldn’t want to do that to anyone. I will say, however, that our two main characters Deryn and Alek are still stuck in the middle of the war between the Clankers and the Darwinists. The Clankers are those Austrian-Hungarian/German powers who favour mechanical constructs. The Darwinists are the British/French etc allies who prefer to tinker with life itself and create airships and much much more out of living creatures. 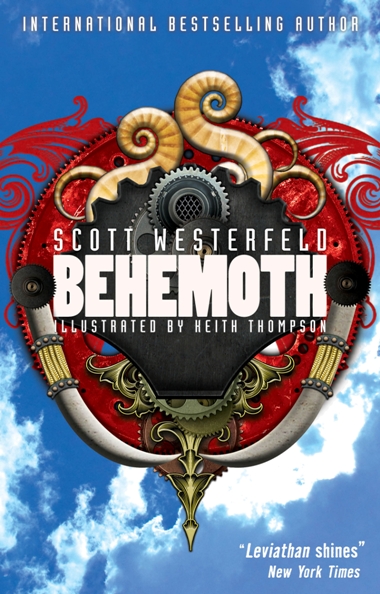 I really really enjoyed the first book in this series. It was such an interesting take, with the steampunk mixed with the fabricated creatures. And I really enjoyed the two protagonists, so I was looking forward to this one. Unfortunately something about it just didn’t click with me. I’m not sure why, but it fell a little flat.

It is still an entertaining read, and a wonderful take on the first World War, and the Ottoman Empire, it just felt as though the story never really got going.

But I’ll still be on the look out for the next book[1] because it was entertaining and readable, and very likeable. Just not as fantastic as the first. I do hope I amn’t damning this book with faint praise, because that is not my intention. There is a lot of action and derring-do, plus the world-building is creative and interesting. Maybe it was whatever mood I was in while reading it, and you’ll have better luck with it? If you’ve read and enjoyed book 1 I’m sure that this will keep you entertained, almost as much as the first :)