Nailer is a ship breaker, one of those who make their living from scavenging the ships left over from the Accelerated Age. That was a time when oil, metal, resources in general were abundant. Things are different now, and for the poor of the world, like Nailer, life is hard. And it is getting harder for Nailer, as he gets older so he gets bigger. Soon he won’t be small enough to work the light crew, but he doesn’t have the build for heavy crew. Not nearly. And without a crew you don’t have a chance at surviving. 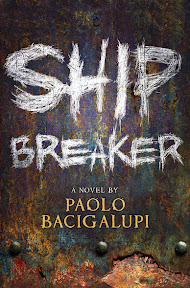 Ship breaker is a hugely entertaining story, set in a really well thought out world. Nailer is a great character. His life is hard, and it has made him hard in certain respects, but he still has morals. He knows that although getting ahead is important, so too is honesty, loyalty, and sticking to your crew. Or so he has learned, almost the hard way.

I liked a lot about this book, although I would have liked to learn more about the world in general, especially the “half-men” perhaps we will get a sequel…

But what set it above other books is the central character. Nailer is just great. He is far from perfect, battling his own demons and his sense of who he is. And how other people see him. I suppose in a way it is a great example of a coming of age story. Nailer certainly grows up a lot, and learns a lot, learns that there is a lot more to the world than he had ever thought.

But as well as that it is very much an adventure story. And a sea adventure story at that. Towards the end it really put me in mind of some of the Patrick O’Brian books I’ve read. This doesn’t go into quite so much details as regards ships and nautical terms, but there is a similar sort of feel to it.