Okay, so we all know what is going to happen in this film. Don’t we? I mean, we all have heard of Planet of the Apes and pretty much every one, even if they haven’t seen that film, knows the plot. But it sure is fun getting to the talking apes, and the way we get to it is through medical experiments. Looking for a cure for Alzheimer’s in particular is what leads Franco’s character into experimenting on chimpanzees, and then the birth[1] of little chimp baby Caesar. 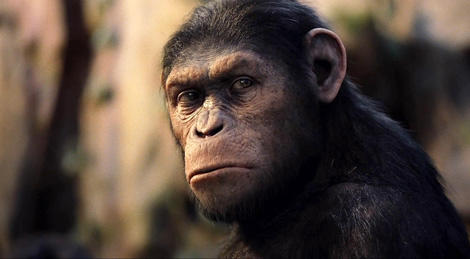 The Rise of the planet of the apes

Leaving aside the whole science part, because lets face it, it is total balls, the story is excellent. You’ll really feel for these cgi apes in a way which you don’t in many other films. Now maybe it has something to do with the fact that I’ve read The chimps of Fauna Sanctuary fairly recently, but knowing that little bit about what we have made real chimpanzees suffer through was enough to get me on their side in this film.

And I really liked that. We are supposed to be on Caesar’s side. He is the good guy, and for the most part the humans are the bad guys and you don’t want to see them get away without being punished. And it really was surprisingly emotional, or at least I found it surprisinlgy moving even though the whole way through I was very much aware that this was a cgi creation, it never really appeared *real*. None of the chimps/apes did. But I think that was a deliberate move on the part of the film makers, I may be wrong. I would say that Andy Serkis totally deserves an Oscar for his performance. You really do empathise with his character, even if, like me, you do find him threatening and more than worthy of fear. At one stage a character says that she loves chimps, but that she is afraid of them. And that we should be. And that is how I felt about Caesar. I wanted him to be happy, but you couldn’t help but feel that he was a very dangerous individual.

Thoroughly enjoyable film, one I’d watch again, no problem. If you haven’t seen it off you pop.