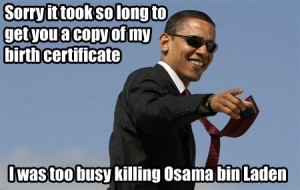 So, that was unexpected news about Bin Laden, don’t you think. I was out doing the garden this morning and so was later than the rest of all the world in reading about it. And as an anti-death penalty person I have to say that I’m quite happy hearing he isn’t with us any more. Not so sure about the pictures of the jubilant scenes outside the White House, but I guess a lot of those people were affected a lot more by the September 11 attacks.

There is an epic thread on Metafilter about the issue, I’m sure someone there has said what I think, I’m guessing plenty have said the opposite of what I think too, I’ll leave you to figure out which is my opinion :)

Instead I’m going to do a catch-up post. Some of this I have mentioned on twitter, but a longer more drawn out account is always welcomed by people on the internet. So I’ve found.

We moved out of the apartment around a month ago, noise levels and vomit prompted our search, and within the weekend we’d found a new place, a house! A semi-d and within the same general walking distance from work and shops and all that important stuff. So we’ve been settling in now, Lady Mew has a garden to wander in. Before this she was purely an indoor cat, so we aren’t about to let her loose. There are plenty of dogs about, as well as cars, which she hasn’t had to deal with before. So she gets put on the lead and taken outside. Unfortunatly she has decided that she really likes being out and about, and protests a lot when you tell her that it is time to come in. Bribery is the answer.

On Friday I was just about to get the bus straight from work to Dublin to hang out with NM and go see Fast and Furious Five when I got a phonecall from himself saying that Mew had gotten loose. So of course I had to come home and set about finding her.

Stupid animal had spotted another cat and taken off after it. She had been on the lead, but can be faster & stronger than you may expect, and the lead slipped out of his hand. Disaster!

Luckily enough she did eventually come home, but we’ve learned our lesson so spent this morning putting up a temporary stop-gap measure of meshy stuff to stop her in case she gets loose again.