This once existed only as a trailer to Grindhouse but one day some one decided to go on ahead and make the film. I mean, it has a catchy title, in a Snakes on a plane sort of way. And the idea of a sort of comedy action film with Rutger Hauer as a hobo with a shotgun sounded like it might be vaguely entertaining. 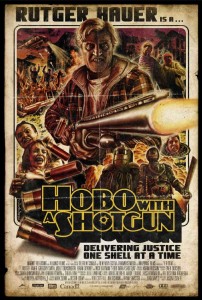 Please, do not watch this film!

I don’t have much to say about this film. I hated it. Absolutely hated it. Possibly even more than I hated the god-awful Observe and Report. It was just plain nasty. With extra nasty on the side.

It glories in the nasty, to be honest. I have no objection to violence in a film. Classy action filled violence that is. But when we are spending more time looking at the suffering of people, well, thats just not what I find entertaining. Maybe my expectations were out of whack, I was hoping for something as entertaining as Black Dynamite, but these two films are poles apart.

Tags: can I give a minus rating?Hobo with a shotgunmake it stop oh god why did I do this to myself!nastyterrible film