In 2154 the rich and privileged have abandoned Earth and now live happily ever after on a space habitat, Elysium. There all your illnesses can be healed, and Jodie Foster runs the defence. I’m not quite sure what the people who live there do all day apart from look pretty and attend posh looking dinner/garden parties. Back on earth people are poor and run down. If they get sick or injured there is no medical miracle to save them.

Max was once a bad boy, stealing cars to make a living, but he has been to jail and he wants to stay clean now. He works hard in a plant manufacturing droids. But then one day he has an accident, suffers a fatal dose of radiation and has only five days left. His only hope is to make his way, illegally, to Elysium and use their technology to save himself. That is his aim. But he has no cash to pay for the journey so he agrees to do one job for the local crime boss Spider to pay for his flight. The job, of course, isn’t so straight-forward. But it means that he might be able to “save everyone” on earth. 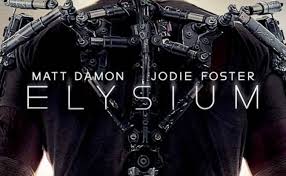 This film has a lot going for it. I like Matt Damon as an actor, his character is believable. He isn’t trying to be a hero, he just wants to save his own life and circumstances conspire. It looks great, the action scenes are great. But I just don’t think it had enough heart to it. The characters never felt real to me. The whole flashbacks linking Max and Frey were all a bit meh to me. And if an action film really wants to work for me it has to have good characterisation. This didn’t really.

I also thought that the Kruger character didn’t seem to fit in the film. He was too nasty for it.

I did like that it is a big budget action film that seems to arguing in favour of universal health care and socialism. That was pretty cool, but as a whole this film just didn’t really do it for me.