The Indonesian version of SWAT are going into battle. An apartment block has become home to the bad and the violent. A no go area that the police never visit. But now they are going in, intending to get through as many floors as possible without being seen, taking down Tama, the drug lord. 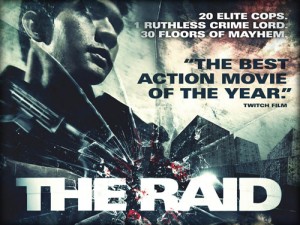 This review is not going to be a long one. Because the plot isn’t long. In fact it is ridiculous in its thinness. And as for characterisation… well, lets just say that isn’t all that important.

Which isn’t to say that this is a bad film, it just isn’t a film that is all that interested in plot and character. Instead it is all about the action.

And the action is incredible. The fights are amazing. And very very violent.

But, for me, it was just too much fighting. For others watching the film with me it was the most awesome film ever made. I disagree. I’m glad I watched it, and the fight scenes are incredible, I cannot state that too many times. Well, I probably have, but you get the message. Action = yay! Story = Where?