I really have no idea where to start this review. I mean, there is no point in recapping the plot is there? Either you’ve read the book, or see LOTR, or heard somewhere else that “In a hole in the ground there lived a hobbit” and how he went on adventures with some dwarves looking. I can’t imagine there are too many people out there who can please ignorance to the whole LOTR/Hobbit phenomenon.

And I know that this is not going to try and be some objective review on the filmmaking or story-telling, because that’s not what I do.

So, just my ramblings and observations. 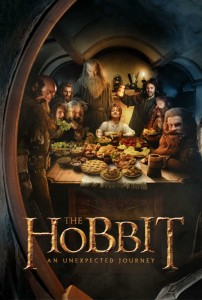 The Hobbit An Unexpected Journey poster

I went in with low expectations. I didn’t think it could be as good as LOTR and didn’t want it to try and be the same sort of film. The books are very different after all, why shouldn’t the films. And although I tried to avoid and ignore all reviews I couldn’t help but hear a few rumblings from the belly of the internet saying that some people weren’t very happy with The Hobbit.

I, however, loved it.

It does have issues, in places I found the cgi not entirely convincing, and in one or two scenes the action seemed speeded up and happening too fast. Storywise I’m not sure it needed “Old Bilbo” and Frodo in it. I think that maybe at the end of the third film would have been sufficient. And I do think it was a trifle long. Although I am willing to be told that was just because I was being especially time conscious on account of having a bus to catch.

But for the most part I thought it fantastic.

I loved young Bilbo and his being uprooted by Gandalf. A younger, an slightly more insecure Gandalf than from the LOTR. He is more irritable too I think, but not in a mean way. And anyone might be irritated by the behaviour of some among the dwarves :)

There are plenty of changes and additions to the story. Some from the appendixes, some not. I liked them and how they worked in the film, however if you are someone who doesn’t like anything changed then you just may have a long list of complaints. I have also heard mention that some people found the film slow, or boring! Quite how they managed to do so I don’t know. I loved the set-up, and the getting to know the characters, and the setting the scene, and the songs. I’m not certain what to make of the idea that there will also be an extended dvd version though. But the more time I get to spend in Middle Earth the better.

I loved the Gollum scenes. They were just great, this is a different Gollum than in LOTR remember. Yes, evil and tricky and murderous. But also somehow more light-hearted and innocent. I guess a trip to the torture chambers will do that.

And Smaug! Oooooh. We didn’t see much of him but what little we did was just brilliant. Cheesy peas

Now, when do I go see it again?