Well it has been a while hasn’t it? My last post was way back in December of last year. That’s almost four full months! The main reason for my absence was that I bought a house! Excitement, but also time-consuming and internet-interfering-with. We’ve moved out the country, and being a *whole* ten miles from the “big smoke” internet is not so easy to obtain. But I finally got connected yesterday. With a grand speed of 1mg. So yay! in a way. 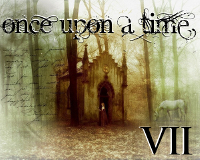 Luckily enough I am just in time to sign up for this year’s Once Upon a Time Challenge. I’ve no idea what I’m going to read, so for now I will just commit to The Journey.

By signing up for The Journey you are agreeing to read at least one book within one of the four categories during March 21st to June 21st period. Just one book

In my internet-absent days I also managed to read the rest of the Wheel of Time series. I’m still not quite sure about how I feel about that final book. I hope to write a post about that at some stage. And I got another dog just a few days ago. He is off to the vets tomorrow to get the snip but so far he is settling in very well and the pre-existing dog is only delighted to have a playmate who has as much energy as she does.