Book three of The Wheel of Time
spoiler warning in effect for this and *previous* titles in the series.

At the end of book two Rand proclaimed himself the Dragon Reborn, but he is still in denial, and wants to prove it. One way or the other. So he decides he will force one of the prophecies to come through. If he can do it, well, that’s it isn’t it. And if he dies in the attempt, well, at least he won’t be a false dragon dangling on an Aes Sedai string. So he heads off, all alone.

Leaving a very irate, and most likely worried, Moiraine to follow after him. With her is Lan, obviously, and Perrin. Mat has been taken to Tar Valon for healing. And with him are Elayne, Egwene, and Nyneave who have returned for more training after their adventures away. They expect to be welcomed back but are in for a bit of shock when it turns out that no one is very happy with them at all. 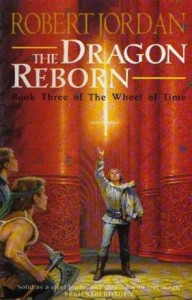 You know, for a book entitles The Dragon Reborn this actually makes very little use of Rand. He is off moaning and whining in denial, but only in the occasional chapter. For most of this book we are with are learning about the others. Rand has had centre stage for the most of the other two books so this is a little different. But it is a good difference. Mat gets his first point of view chapters, and Perrin gets more “on-screen” time too. Nyneave, Egwene, and Elayne are allowed to do there thing. It follows the pattern set in the earlier books of having the characters all off having their own adventures, only to be brought together for the final few chapters.

I think this is one of the shortest WOT books, and one of the best paced of them I think. There is plenty going on, we get a feel for everything without being bogged down in too many details and characters. Adventure, magic, and evilness everywhere.