translated from the German by Shaun Whiteside.

Seeing a couple break-up in public Kris goes over to apologise to the woman. He tells her that her ex is sorry for what he has done, that he wishes he hadn’t, that he wanted to say this himself but couldn’t. It makes her feel better. Of course, it was a lie, Kris doesn’t know this woman. Doesn’t know her boyfriend, he just thought it would help her. And now, it has given him an idea. All around Berlin there are people, corporations who would like to say sorry, but they just don’t know how. Kris is going to set up an agency. A company to apologise on another’s behalf.

And what a success he, his brother and their friends make of this enterprise. Soon they are getting more jobs than they can handle. They are making so much money they don’t know how to spend it. It seems like things are going well. But there is always a but, isn’t there? 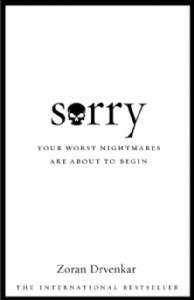 In this case it results in Wolf standing in front of a dead woman. A murdered woman, with instructions to apologise to her. And then to dispose of the body. And from here, things get a lot worse.

I’m a bit conflicted over this book. It isn’t my usual sort of read, but I do like to pick up something “different” every now and then, and this is certainly different. It is divided into sections and timelines. Before and After. And while some chapters are told in the usual third person narrator, others are first person, while others are second person. And there is a mystery over who these narrators are. It makes for a confusing read to start with. But once you come to grips with that you can get more into the mystery aspect.

Who is the murderer? Who are the murder victims? And what does it all have to do with the agency?

And then of course there are the bigger underlying themes. What is remorse? Forgiveness? What is an excuse and what is a reason? Where does compassion and understanding end and judgement and condemnation begin.

As I read the opening few chapters of this novel I was almost ready to put it down and forget about it, but the more I read the more interested I became. I still don’t think I’d rave about it, but it certainly raises some interesting questions.