The goblin experience of the world is the cult or perhaps religion of Unggue.
–Terry Pratchett - Snuff - c. 2011

A Discworld Night Watch story. Although the Night Watch is now the city watch, and this isn’t set in the city… still. That’s what it is :) 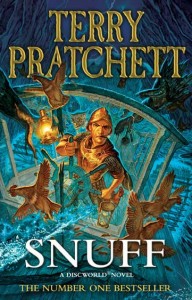 It is almost pointless to review this book. I mean, surely if I say it is a book by Terry Pratchett, set in Discworld and starring Samuel Vimes then that’ll be enough?

But just in case you need a little more, Vimes is taking a holiday in Sybil’s family home in the countryside. It wasn’t his idea, the countryside isn’t exactly his natural environment, but these things must be done. It is a family holiday so young Sam is along as well, and of course, they couldn’t leave Wilikins behind could they. A gentleman needs his gentleman’s gentleman, surely. But things are not as quiet as they may seem in the rural surroundings, and Vimes’ policeman senses are tingling. Something is not right, and it doesn’t matter where he is, the law is the law.

I’m sure if you are a Pratchett fan then nothing I say would persuade you not to pick this up and I wouldn’t want to. I’m not sure why it took me so long, its been sitting on my shelves for a year now. And if you aren’t a Pratchett fan, well then you could read this and enjoy it and love it, but you’d be much better off starting with Guards! Guards!, which is the first adventure of Vimes. If you don’t love him after that then I don’t want to talk about it!

Snuff has everything you want in a Pratchett book, humour, fantasy, philosophical wonderings and speculations, statements about the world and society, all hidden under comic fantasy. Honestly, just read the books already.

Other reviews: Things mean a lot ; Resolute reader ; Scottish geeks.
And check out the Metafilter discussion too.