Book two in The Lion Hunters.

After the loss of her family Goewin is forced to flee Britain. In the company of Aksum’s ambassador to Britain, Piamos, she travels across Europe and into Africa. Her father’s ambassador, Constantine, is to be regent of Britain. But is he a man she would be willing to marry? To have rule Britain? 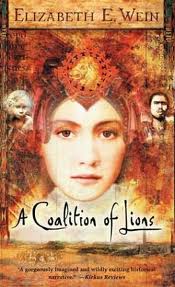 A coalition of lions

After The Winter Prince I really wanted to read more about Medraut, his family and what happened next. Unfortunately this book didn’t do a whole lot for me. I like Goewin as a character, but I never really felt her journey. I also really liked the fact that it was set in Africa, in Aksum, roughly ancient Ethiopia. But it was too much politics and talking, which just didn’t hold the story together enough for me.

I think that I will still read the next book in the series though, that’ll decide whether or not I keep going with this very alternative Athurian story.