I have no idea what to say about this book. I have no idea what it is all about. But I suppose I should make some sort of an effort. The Islanders is not really a story, it is a travel guide. A guidebook to the Dream Archipelego, and of course I haven’t yet read the book of that name, so perhaps it would help with this one if I did. However at least parts of The Affirmation were set there, so I did have some little background. Most of the chapters describe an island, giving a bit of history, or information on the island’s culture & society. And every now and then there is a chapter which tells a bit of a story. They are all tied together around the possible murder of a famous mime artist, and a love story.

Or at least I think they are. 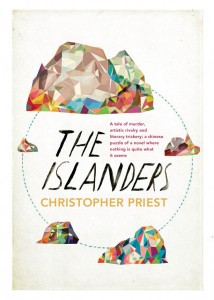 I have read other books by Priest and often I have been left with the impression that I didn’t quite get all that was going on, but never have I finished one and thought that I had no idea what any of it was about and why it was written in the first place.

But, and here is the thing, I still finished it. So I guess on some level it worked. I was interested enough in the early hints that I continued through to the end. I’m not entirely sure if it was worth the effort however. There are some great ideas. And I like the style of writing. But I prefer a story and characters to a travel guide with hints at a story and characters.

Tags: BSFA Award winnerdoubleserrr I have no idea what is going on herelibrary bookmurderno such thing as an objective truthThe Islandersunreliable narrator