Nancy and Shamus were man and wife, and they lived all alone together for forty years; but at length a good-for-nothing streel of a fellow named Rory, who lived close by, thought what a fine thing it would be be if Shamus would die, and he could marry Nancy, and get the house, farm, and all the stock.
–Seumas MacManus - Donegal fairy stories - The Plaisham - c.1968

I do enjoy fairy stories, of all shapes and sorts. When I was younger I read plenty of the children’s versions of the Irish myths and legends. But I don’t ever recall coming across these stories before. They aren’t the myth and legend of the Red Branch, or the Fianna, but instead are versions of more traditional stories. Irish versions of Snow White, and the like. I loved them. 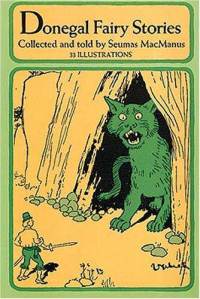 MacManus, who collected and translated these stories from the Irish, tells them in the the shanachie style. For the non-Irish out there a shanachie is a story-telller. And the best way to explain that style is to show you. This is Eddie Lenihan, who used to be on the Den telling 5 minute tales back when I was a child. In those far off and distant days :)

Anyways, these are great little stories. Perfect for reading out loud. You really get the sense of what it must have been like telling stories to a group of people all sitting around the fire, joining in with the repetition and recognising the commonly used phrases.

In short, they are awesome!

Tags: Conal and Donal and TaigDonal that was rich and Jack that was poorDonegal fairy storiesfairy talesHookedy-CrookedyManis the MillerThe adventures of Ciad son of the King of NorwayThe amadan of the doughThe bee the harp the mouse and the bum-clockThe old hag's long leather bagThe plaishamThe snow the crow and the bloodTraditional storiesTraditional stories - Ireland