Teenage boys are going missing in Innertown. Where they go and what happens to them, nobody knows. Some say that they have runaway, escaping the town with its pollution, disease, death and lack of a future. Others say that no one ever leaves Inntertown, and why didn’t they talk of their plans to anyone else. The feeling is that something has happened to these boys. Something bad.

Leonard’s best friend is one of the missing. He doesn’t believe that Liam would have run away without telling him. Without bringing Leonard along. And the local police officer, well, he knows, without a shadow of a doubt that those boys didn’t leave of their own volition.

But Inntertown is a place in decay. The chemical plant that once produced jobs has closed down, but the chemicals it manufactured have damaged the environment, and the people. They are all affected by it. Some die quickly, others linger in sickness. But everyone has something, even if they don’t know it. 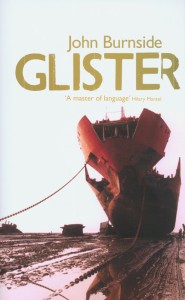 The first book by Burnside that I read was A summer of drowning which I really really liked. This one was a bit of a let down.

It has the same wonderful writing, but I just couldn’t enjoy this book. It was too unpleasant. Too sad and depressing. And I hated the ending. Hated it. I don’t mind an open ending, but this was just… nope. hated it.

I think the fact that there was no hope in this book that was the problem for me. I don’t mind grim and dark and horrible if there is some sort of escape for at least one character. But here you start to think that maybe Leonard will get out, will escape you know that he won’t. And then he does something and even though as a reader I did sort of understand why I just couldn’t wish him well after that. He kept going on about having no choice, but everything in life is a choice. He made the wrong one. And while he doesn’t deserve total condemnation I do think that you need to answer for your actions.

And then there is the policeman, Morrison. God he was dreary and wet, and, yes, again I did sort of understand him, but he was just so weak.

If this had been the first book by Burnside that I read I don’t think I’d be reading any more. So I guess it is lucky that I picked A summer of drowning up first.