On their twelfth birthday all members of the royal family are “bound” to a member of the pegasi royal family. It has been so ever since humans first came to this land they named Balsinland, after the first king. The pegasi at the time were in danger of being wiped out, attacked by rocs, wyverns, taralians and other dangerous creatures. The Alliance with the humans was a decisive swing in the balance of power, and for thousands of years now there has been relative peace. But the pegasi and the humans cannot learn each other’s language, needing magicians to translate for them. Until now, when the fourth daughter of the king learns that she can speak with her pegasus, Ebon. But not everyone is happy about this. Some of the magicians think that this communication is a the Alliance. Against the interest of the people. 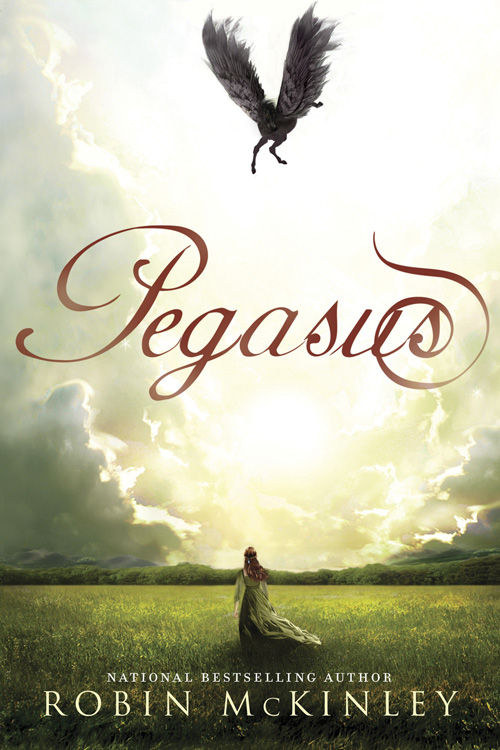 Awww, look at that purty cover! Can you guess why I picked up this book? Okay, so it is written by McKinley, which is always a good thing. But also, as I’ve said before flying horses are awesome. Even if, in this case, they aren’t really flying horses as all. They are still awesome.

But this is a very different book to O’Hearn’s Pegasus and the flame. It has proper characters and characterisation, no gods and goddesses, and brilliant world-building. It is also a lot slower to develop and in some parts I felt a little clunky.

But I still enjoyed it.

However, it is part one of a story. Pegasus II is not due out until 2014, and it ends on a cliff-hanger. I hate that! Especially considering that I didn’t know that before starting the book. I really think that publishers should be obliged to mention on the title page that this is a story that won’t be finished in this book. It should be a law or something. And when I take over, it will be!

There were parts of this book that I really enjoyed, but as a whole I can’t really say that I loved it. Just a tad slow in the pacing at the start of the book, and I don’t think that the bad guy was threatening enough. I understand that Sylvi and Ebon were totally unusual, and their relationship was totally against many of the rules. But it never seemed threatening enough to be all that dangerous, and so that aspect of the story was lacking in tension. Even though it shouldn’t have been, because it is the central plot point.

So, all in all, a good, solid read, but more of a wold-bulding, establishing the scene sort of a book than an action packed one. I will be picking up the sequel as soon as I spot it though.