Mythology and Reality collide! So the blurb on the back of this book tell me. The mythical winged stallion Pegasus crash lands on a rooftop in modern day New York, fleeing a battle which has destroyed much of Olympus. Emily, a teenager living on the top floor of that building hide him, bringing him food until his wounds heal, and keeping him safe. But the Nirads that caused his wounds won’t stop until they destroy him, and they have followed him from Olympus to our world. 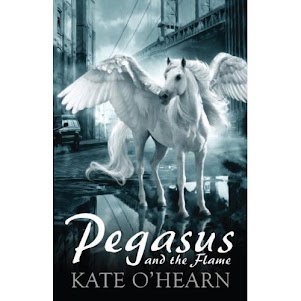 Pegasus and the flame by Kate O'Hearn

First we had vampires, then angels were the big thing. Zombies also made an appearance, and this is the second YA book I’ve seen recently to feature Pegasus, is this a new trend?

I certainly hope so, cause horses are awesome and ones that fly are even more awesome!

When I was a child I devoured books, and especially books about horses, Black Beauty is the first book I can remember owning, and then there were all those Christine Pullein-Thompson pony books, and the likes of The Silver Brumby. If it had a horse I’d at least pick it up and give it a go, so, if I was a child now I would certainly pick this book up.

As an adult though… well, it is still entertaining, but you can certainly tell that it is aimed at children. Not that that is a bad thing in a child’s book though, so maybe that is a selling point. Likewise there are details that, well, aren’t detailed. Like who exactly the bad guys are, but there are to more books in this series so explanations may be waiting until then.

The characters are quite one dimensional, Emily, as the main character has a little more going for her, but she isn’t the most developed hero in the world. And her side-kick Joel is almost a tick-the-boxes angry kid with a heart and a tragic past. But you know what, it doesn’t matter. It is a well told adventure story with a flying horse! Come on, that’s just awesome :)

Other reviews: Books, mud and compost ; WTF are your reading?