As a film critic Mark Kermode watches films. A lot of films. A whole lot of films, and he often doesn’t like what he sees. He describes how he started reviewing films as a child, not for anyone else to read or listen to, but simply to keep track of films he’d watches and how he felt about them. Of course since then he has become Britain most trusted film critic, with a whole 3% of the people asked voting for him.

I have to say I do like his attitude to films. It is one that I have often thought when writing about a film or a book, a lot of how you experience a film is based on what youbring to it yourself. And so, of course, opinions will change and develop over time.

But this book isn’t really about reviewing films. It is about the state of the film industry at the moment. 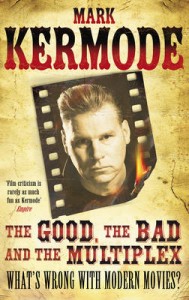 the good the bad and the multiplex - Mark Kermode

And the damage, as Kermode sees it, being done by the rise of the multiplex and the move from celluloid to digital. Personally I don’t agree with him as to the whole digital thing. In some ways it is similar to the argument over whether ebooks will replace hard copy ones, but at the same time isn’t, because the consumer of films isn’t really aware of the “magic” of celluloid. Personally I really don’t care whether the film is digital or celluloid once it looks like it is supposed to. I can totally understand his frustration at the lack of supervision that has resulted from the lack of a projectionist at work. My first viewing of Lord of the Rings: Return of the King had some dodgy aspect-ness going on that had to be complained about before it got sorted.

For the most part I really enjoyed this book. Kermode writes in a very entertaining fashion, and with a lot of humour.

If you are interested in films at all then I would recommend this book. You might not agree with it all, but you can’t accuse him of lacking passion or interest in his field. And he knows what he is talking about as well. Which is always a plus in a non-fiction book.