Olympus was unlike anywhere Emily had ever been before.
–Kate O'Hearn - Pegasus and the fight for Olympus - c.2011 - pg.1

Sequel to Pegasus and the flame

As I said about the first book, this is a children’s book and is written for its market. Which means that it isn’t too concerned with character twists and darkness, or subverting genres, or any of that sort of thing. Instead it sets out to tell a story, an adventure story with some myth thrown in to the mix. 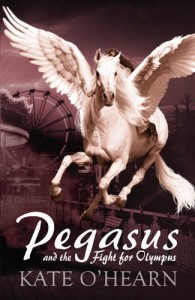 Pegasus and the fight for Olympus by Kate O'Hearn

Emily used to be an ordinary New York school child, but now she is the Flame of Olympus, but her father is still in the hands of the evil CRU and she intends to rescue him, with or without Jupiter’s help. But she also has to worry about her new powers and her lack of control over them. She runs the risk of hurting the very people she is trying to help. And to cap it off the dangerous Nirads are back!

This is a quick and easy read. It is entertaining enough but it wouldn’t be a book I’d revisit. If I was a child though, well maybe :) It is full of action and there is rarely a dull moment, so it is very easy to just keep on reading until you suddenly come to the end, there isn’t a dull moment.

Plus, you know my previously mentioned weakness for horses (even if Pegasus isn’t really a horse).