Ross O’Carroll-Kelly started life in The Sunday Times and currently stars in The Irish Times, he is a fictional wealthy southside Dubliner. It is a satire of a certain aspect of the Celtic Tiger population. Those who speak in “Dortspeak”.

But I’m guessing that means very little to any non-Irish blog readers, so I’ll keep this review short. I’ve only ever read the odd column starring Ross so when my book club picked this one to read I was a bit worried that a whole novel worth of Ross and his cronies would be too much. 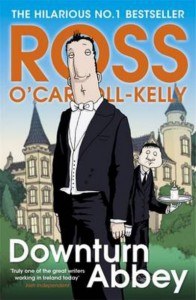 But to be fair to Howard, he plays it just right. Ross is an asshole and a total and utter wanker. But that fact is so obvious that you can’t really feel sorry for anyone he screws over. They really should’ve seen it coming. Plus, it is a comedy satire book so there are no real characters to feel for. If you know what I mean.

And it is funny. I couldn’t help the odd snort of laughter on occasion. Howard really does get some scenes perfect. But it if you turn your brain on then it is a little depressing. The fact there are people out there like Ross, Sorcha and his horrid daughter, whose horrid-ness has been totally created by her parents.

And I’ve heard that there are some people who think Ross O’Carroll-Kelly is some kind of role model! That’s just beyond belief.