This film is just great. It is so unsettling and uncomfortable and eww-inducing. There were parts where I just couldn’t watch. It is just… damn.

But it isn’t graphic in a guts being spilled over the place, or slicing and dicing people. It is graphic in the little moments, and that is what makes it so relatable. We’ve all had itches and scratched when shouldn’t, so when we see the main character scratching at her red rash we as viewers know how that feels, we can empathise in a way that isn’t possible when you see someone get stabbed with a sword because that isn’t really all that common.

At least I hope you’ve never been stabbed with a sword. 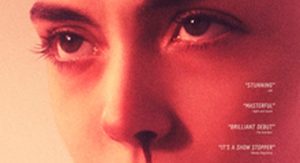 From the opening scene it is a film that grabs your attention. Sometimes in a shocking way, sometimes because of the character. I found Justine (Garance Marillier) had great screen presence, you always wanted to see her, to know what she was thinking.

It is a film with a very tight focus, everything is concentrated on Justine with very little background information or scene setting. But that works, because that is the situation she finds herself in. Off to college and faced with hazing rituals1

the fact that she hooked with Adrian, I mean he was gay, and then suddenly bi? I know he had one outburst to that effect, but it just seemed to come a bit out of nowhere, and if the genders were reversed and it was a lesbian suddenly hooking up with the main protagonist I’d certainly be a tad hmmmmm in a disapproving manner.

But overall I really really enjoyed this film, if enjoying is the right word for experiencing a person discovering that they are a cannibal…