When a book opens with a death by farting, two deaths by farting actually, you know this isn’t your usual run of the mill science fiction story. The deaths mentioned occur at trade negotiations between earth and the Nidu, and the farting was designed to provoke the Nidu delegate, the fact that he died seemed at first an improvement to the human involved, his death occurred during a fit of laughter. But these deaths are not just a temporary hiccup in deciding how many bananas can be sold, the Nidu believe, correctly, that it was an orchestrated anti-Nidu act. And they want retribution.

If, however, Earth can provide a very specific and rare item then maybe the Nidu can be persuaded to overlook this attack. And as the Nidu have considerably more firepower that the earth it might be a smart move on humanity’s part to give them what they want. 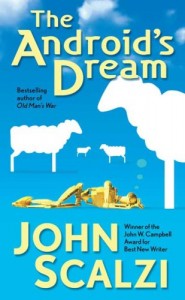 If you are thinking hmmm, that title sounds familiar you’d be correct. It is a reference to Philip K Dick’s Do Android’s Dream of Electric Sleep and that might make you think about artificial life and robots and whatnot. Well, there is a bit of that in this, but mainly this is an adventure story. Harry Creek and Robin Barker on the run as various different groups try to run them down for various reasons. But it also has religion there in the middle of all that, as well as artificial intelligence.

I enjoyed it, a lot. It’s a fun, humorous read, although I found the ending a little rushed and woah, dude, look we’re over. But Creek is an engaging hero. And Robin is far from the worst female in distress I’ve read, even if she has remarkable little agency she reacts very believably. If you were thrust into a similarly life-threatening and bizarre situation I doubt you’d come up with a bright idea to save yourself, you’d go along with what the trained professional advised. Well, either that or freak the hell out. She doesn’t, so that’s a point in her favour.

WHy was it up to Brian to save the day? If an artificial life similar to his already existed, as it did, and told him what to do, why didn’t she step in and take over the Nidu system at that point?

Also, authors, if you have a group of married people sitting around having dinner and you describe one as Mrs Gracie then you should describe the other as Mr Gracie, not just Gracie. Or am I the only person bothered when men and women get different naming conventions in that manner?

I won’t say this will join my favourite books, but it was a nice bit of sci-fi fun.

Other reviews : Stainless Steel Droppings ; Just a world away ; The Sound of Paper ; Fred’s ramblings ; Worlds Without End entry