This is the story of a scientist who falls in love and marries. But his wife, although beautiful, has a flaw. A birthmark in the shape of a small red hand upon her cheek. Unluckily for her she is very very beautiful and, as her only flaw, this mark is a disaster. Or at least it is in the mind of the scientist. Other people thought it actually accented her beauty. But not him. And of course she learns of his revulsion and so she too learns to hate it, and soon asks him if he can remove it using “science”. 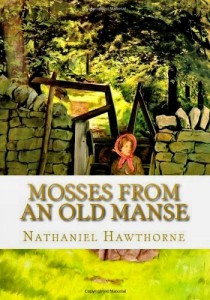 Mosses from an Old Manse

I am reading this for the Coursera course I’m doing, and if I weren’t I wouldn’t be rushing out to read any more by Mr. Hawthorne. I just didn’t like this at all. The style was plodding. The plot was yawn-worthy. And the characters! Well the scientist was an arse for marrying this woman and only then discovering that he hated her birthmark. And she should have slapped him.

It felt more like a morality tale than a short story. If the rest of his stories are similar in nature I think I’ll have to write about the fact that they are morals, unlike the earlier fairy tales, despite how they are described.

I really hope the other stories by him are more entertaining.