"I see you like my books." When I heard the old voice, I knew I was dead. All the hair on my neck ridges blushed red and stood on end.
–Del Law - Beasts of the walking city - c.2013

Book one in the Walking Cities series

Blackwell is a Hugliev, a once powerful race that have been hunted to the brink of extinction across all known worlds. Often they are referred to as beasts, the fur can change colour depending on mood and emotion, but also for the likes of camouflage. He and a small band of thieves/mercenaries/relic hunters are trying to steal a space ship. It’s a couple of hundred years old, the technology that built it has since been lost, and Al Capone is looking for it. 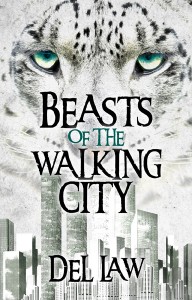 Beasts of the walking city by Del Law

I’ll admit, it was the title of this book that attracted me, the idea of cities on legs is pretty impressive. I was also hoping for somewhat sentient cities, but alas, that was not to be. Also the title is fairly misleading. Okay there are walking cities, and Blackwell is described as a Beast, but really that’s as far as that goes. The whole blurb seemed to me to be misleading. Steampunk? nope. Feuding gangsters? Not really.

But at the same time it is a good solid bit of entertainment. It is s fun, quick read, and once you accept Blackwell as a wise-cracking teenage type then it is all good. The second book in the series isn’t out yet, and I’m not sure if it ever will be, but that’s okay, because this has a definite end, although there are more than a few loose ends that could be developed further. However, it isn’t one I’ll be waiting for, if I come across it and I’m in the mood I’ll read it.

That’s the essence of this book, readable, not life changing.