translated from French by Adriana Hunter

It is eleven days since our first person narrator has died. He was just twenty one years old when meningitis took him. Now he tells the story of how his parents, specifically his father, are trying to cope with that hard fact. Their son is dead.

This is a true story. But it is also a fiction. Lion, the son, is the reader’s narrator. Telling us that he is there to witness his parent’s tears and grief and despair. It is, as the blurb calls it, a blurring of memoir and fiction. The facts are real, the manner of their telling is fiction. 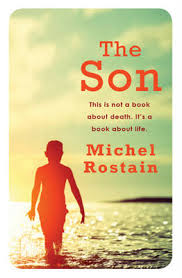 The Son by Michel Rostain

It is a beautifully constructed story. Heartbreaking, of course, due to its subject matter, but not mawkish or overly sentimental. Anecdotes and stories about the son are revealed, his life shines through in the midst of this tale of his death. He may be gone but he lives on in his parents. But only in their memories. It is this wonderfully terrible mixture of delight in his life and grief that he is gone.

Some of the aspects of the writing didn’t quite work for me. If it is the dead son that is telling the story why does he focus so much on the father and not on the mother? But of course, this is the father writing. He can only tell his memories and thoughts and how he tried to cope with it. But this is a minor quibble, and one that shouldn’t stop anyone reading the book/

The cover says that this is not a book about death but that life is a life after loss. And that is really what the book revolves around, the death of a child, and how people find a way to go on after such a part of their lives is gone.