based on the true story of Richard Kuklinski. 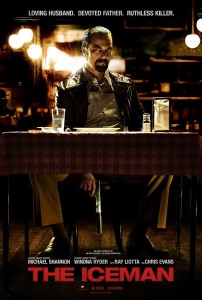 In 1986 Richard Kuklinski was arrested for murder, he worked as a contract killer for the mob, and yet his wife and daughters knew him only as a devoted family man.

This is a competent enough film, there is nothing in it that haven’t been done before, but Shannon is excellent in the role. Scarily excellent. You really wouldn’t to meet him on a brightly lit day never mind down a dark alley-way.

But the film as a whole didn’t really work for me. I wanted more of the family life. The poster sells the film as being about the contrast between Kuklinski’s family life and his life as a contract killer/serial murderer. But there simply isn’t enough of his family life for that. Sure we get the odd scene of him with his wife and his daughters, but those relationships are never examined or focused on. Instead the film is firmly on Kuklinski the murderer, and his life with the mob.

The one good thing about this film is that it never glorifies in the murders, they are never made to look cool or glamorous. But that isn’t enough for me to recommend this film. And when a quick read through wikipedia tells me that Kuklinski didn’t keep the violence out of his home but was in fact a wife beater (I’m not surprised) it makes me like the film even less.