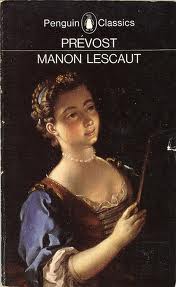 This is a book I would never have picked up if not for the fact that it is on the reading list of an online course I’ve just started. It is the story of the Chevalier Des Grieux, the second son of a wealthy, upper-class French family in the early 18th century. By purest chance he happens to meet the beautiful Manon Lescaut. She comes from a lower class and is on her way to join a convent. Des Grieux himself is destined for the priesthood, but the moment he spots Manon that idea goes out the window.

Unfortunately for him Manon isn’t exactly the most steadfast of lovers. Her fear of poverty is more than enough to send her seeking richer partners. Or so Des Grieux tells us. He, of course, never gives up but follows after her again and again attempting to win her to him forever.

I really disliked Des Grieux. He was such an idiot, and he never ever seemed to learn from his previous errors and missteps. It was the same story over and over again. As for Manon herself, well, the story was told from Des Grieux’s point of view so we never got to see what she thought or felt about anything. Or indeed her reasoning for her actions. All we have to go on is what the Chavalier tells us, and he is an admitted thief, pimp, and cheat. He might not describe himself in those words, not recognise that description as fitting him, but that is what he is.

In the context of the course I am doing it’ll be interesting to see the interpretation we are given for this. The course is entitled The Fiction of Relationship and there is plenty of fiction in the relationship between Des Grieux and Manon Lescaut. A perfect example in many ways.