This is a Superman film. And a Superman origins film at that, so you can guess at some of the plot. Clark Kent dealing with his superhero side, becoming Superman, and learning about where he really came from. But this is a reboot! they are all the fashion these days, so something different must occur.

I really liked the last Superman film, Superman returns really worked well for me. Unfortunately for me the world didn’t seem to agree and so we got no more of Routh’s. Instead, many many years later we got Zack Snyder & Henry Cavill’s version. 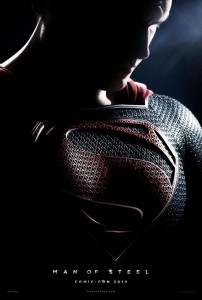 I found the beginning very boring. The whole Jor-El storyline part just did not work for me. I found it ponderous and slow, and it had no impact on me whatsoever. I know it played into the rest of the film but it should have been cut down to half, if not a quarter of what it was.

Part of me liked the introduction to Clark Kent, I thought the flashback idea was a nice touch, but it didn’t work as well as it should. And while I appreciate what they were trying to do with the silent, brooding and isolated Clark it just didn’t grab me the way it should. I actually feel that Cavill didn’t get much a chance to show what he can do, apart from take off his shirt. And yes, okay, he has a ridiculously well built body but I’d have preferred if they gave him more actual acting to do. Because when he was required to act he was engaging and charismatic.

Shanon, as the evil General Zod, is intensity embodied. But again I had issues with his character, actually more with his dialogue. I found all the Kryptonians had rubbish dialogue. Much too much over the top.

I’m a big fan of Amy Adams, there is just something appealing about her. And I liked some aspects of her Lois Lane, but I thought that herself and Cavill lacked onscreen chemistry.

I guess overall you could say that I didn’t much enjoy this film.