I remember being born. In fact, I remember a time before that. There was no light, but there was music: joints creaking, blood rushing, the heart's staccato lullaby, a rich symphony of indigestion. Sound enfolded me, and I was safe.
–Rachel Hartman - Seraphina (prologue) - c.2012

Seraphina has lived her life hiding the truth about who she is; a half-dragon. Her mother died in childbirth, and until that moment her father never knew that the woman he loved was a dragon in human form. Interbreeding is reviled, the products of such a relationship are despised abominations, sins made flesh. And so he hides that fact from all, even from Seraphina, until the truth breaks free.

She too tries to keep it hidden. She tries to keep her whole existence hidden in fact, out of sight and out of mind. But she is a gifted musician and when she becomes assistant to the court musician she can no longer remain overlooked.

I put off reading this book for a long time. I’m not sure if it was the cover or the fact that it uses a quotation by Chrisopher Paolini as a recommendation. But certainly I don’t like the UK cover. Look at it. Okay, the evil eye and the city wall background are fairly generic and do the standard job of letting you know that this is a mediaeval-esque fantasy. But the picture of Seraphina. I hate it. And I’m pretty sure she describes herself as having dark hair in the book. Not red. Also she goes to some effort hide her dragon scales, so you know, showing them off for everyone to see seems a little out of character. 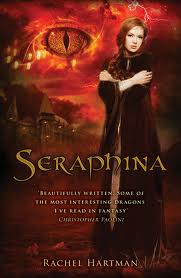 The US cover is much prettier, even if it is does echo Novik’s Temerarie series a tad too much.

And to use that quote by Paolini, who wrote such standard and by the numbers epic fantasy. That was almost enough to put me off. But I’d read so many positive things about it. And eventually I got around to reading it, in time for this year’s Once Upon a Time reading challenge. And I really enjoyed it.

In many ways it is a very simple story, well told. A coming-of-age story in many ways. Told in first person narration this is Seraphina’s story. Utterly and completely, the story of her coming to terms with who and what she is, with who her mother and father are, and what they went through. The typical teen story, albeit with the addition of dragons :)

And of course it is also a story about prejudice and could probably be interpreted in many different ways as being about an outsider in society, whether that society is that of Goredd in the book, or some real life place. Because some people will always find themselves, through no fault of their own, as thinking that they have something to hide, that there is something wrong with them. Seraphina gradually learns that she is who she is, and that some people may hate her for that, but she has to accept her own nature and she will find that plenty of other people will accept who she is too.

But it isn’t a book that tries to shove that message down your throat. That is simply the device used to move both Seraphina and the plot throughout the novel. It serves the story, rather than the story serving the message. An important distinction that means Seraphina never becomes preachy and annoying.

It is a well told story, very engaging, I will be reading the follow up when I can get my hands on it. And her dragons, although not totally unique, are fairly interesting and different enough from most of those I’ve read about to bring something a little new to the table. I particularly liked the memories that they could pass on and their interest in maths. The emotional detachment I hope gets investigated further, because it seems something artificially created. But that is for another book, hopefully.