Jack is a drone repair man. Before his assignment on earth his memory, and that of his communications officer, was wiped, to protect the mission. 60 years ago, or so, the alien scavengers attacked. They destroyed the moon and forced the earth to deploy nuclear weapon. But in winning the war humanity lost the earth. Now only Jack and Victoria remain behind. Jack repairs the drones, Victoria relays orders to and from mission control, keeping an eye on everything. Together they make a most “efficient team”, and they are coming near the end of their term. Soon all the earth’s water will be sent to Triton, where the rest of humanity awaits, and then Jack and Victoria can join them. 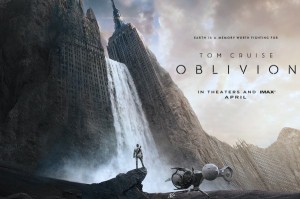 This film has a lot going for it. There are some excellent action scenes, a vaguely interesting plot, some great effects, and a big star. I’m sure it’ll do well at the box office. But it isn’t a great film. I found it lacked heart. There are no characters to root for, or become attached to. Its just Tom Cruise running around saving the day as Tom Cruise is wont to do in his films.

It also echoes so many other films, the music reminded me of Batman, there were some parts that felt like Wall-E to me, another reminded me of Beowulf; there were touches of Solaris, of every sci-fi film out there. And nothing to make up for all that. Well, unless you count Jaime Lannister :)

In a word it was average.