Linh arrived on Prosper Station blown by the winds of war, amidst a ship full of refugees who huddled together, speaking fearfully of the invading armies: the war between the rebel lords and the Empire has escalated, and their war-kites had laid waste to entire planets.
–Aliette de Bodard - On a red station, drifiting - c.2012

Ever since she arrived on Prosper Station Quyen has been welcomed by the Honoured Ancestress, the artificial intelligence that runs the station. Now that her husband has been called away to war Quyen is in charge, being guided by the Honoured Ancestress and taking care of the family. It is the same war that has driven Linh to Prosper. She had served as magistrate, but her tribunal are no more. But that is not her only reason for seeking sanctuary, she offered an unpopular opinion to the Emperor and she fears the repercussions. A distant cousin of the ruling family on Prosper, she has come to escape attention.

But war and refugees and the Emperor are not the only problems. Recently the Honoured Ancestress has begun to act strangely. Is it possible that she is failing? 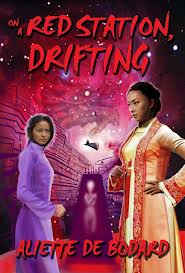 This is a novella that is full of nuance and subtlety. In fact my first impulse upon finishing it was to turn and reread it as I am sure that I missed out on plenty of the interactions between the characters. I didn’t, because it is a library book and has to go back, but I will probably buy a copy for a reread soon.

It is, in many ways, hard to say what this book is about. Extended family. Honour. War. Technology. All this and more. It is a wonderful mix of science fiction and family relationships. Neither the science nor the emotions take precedence over the other, they share the limelight in a wonderfully balanced way. And it is great to get a different take on family from the usual US/Western dominated viewpoint. Family here isn’t just the parents and 2.4 children, with maybe a grandparent or two. Instead it is the whole extended family, cousins, uncles, ancestors going back generations. All of this makes a family, and family honour and reputation is much more important than an individual’s.

Linh and Quyen both have their own objectives, and they come from very different outlooks. Quyen is the lesser partner in her marriage. She lacks the education and knowledge of Linh, and the mem-implants that give Linh the advice of her ancestors. The resulting tension between the two is what is at the heart of this story. And as a reader I sided with both and with neither. Miscommunication and misunderstandings mean that these two women just do not see eye-to-eye on anything. Apart from the importance of family. Perhaps.

If you have the chance you really should read this, it is one that stays with you.

#MeFiFav "MeFi: "Symbolic of the nostalgia for a life I didn't know."" ift.tt/2Di22cm #MeFi

#MeFiFav "MeFi: 6m24s of something walking. A something that changes." ift.tt/306OHMD #MeFi