Book one of The Crescent Moon Kingdoms

In the city of Dhamsawaat Doctor Abdullah Makhslood is the last real ghul hunter left. He and his assistant Raseed have destroyed many ghuls and the men who created them over the years. But on their latest adventure they come up against more ghuls than any one man should be able to raise. And much more powerful ones. But supernatural foes are not the only ones out there. In the city itself the Khalif is succeeding in turning the people against him and a man calling himself the Falcon Prince has in recent years taken to “righting wrongs”. Is rebellion and war going to destroy the city and its inhabitants? 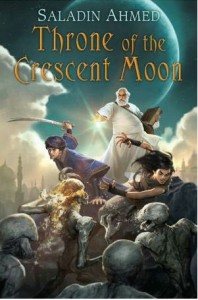 I’m not sure where I first heard about this book. I know I’ve been sing it mentioned here there and everywhere for a while now. And while it certainly is a fantasy novel, and so fits in with my Once Upon a Time reads, it certainly isn’t your usual quasi-european epic fantasy. It felt somewhat similar to Aliette de Bodard’s Obsidian and Blood, but I think that is just because the two books are set in worlds that, although based on real worlds are very unfamiliar to me. The writing styles aren’t too similar, but both feature a hero who isn’t hugely respected in their own cities, but who try their best to fight evil and do good. Although de Bodard’s Acatl is probably higher in society than Abdullah. Abdullah is respected by those he has helped but the powerful in the city probably haven’t even heard of him, let alone think of him.

Throne of the Crescent Moon is a great fun read. It if full of action and adventure, but it also has some great characters. And although the points of view switch from one character to another there is never any confusion over who is telling the story. I loved Raseed and his trying so hard to stay dutiful. And Zamia, the Angel-touched lion-warrior is great too.

All in all it is a great fun read, and I look forward to reading more in the series.