Before I start reviewing this, I just want you to do one thing, read the title of this book. Railsea. Now imagine what that means.

If you have imagined a world covered in railtracks, with trains as ships then you have gotten a bit of an inkling about the world this book is set in. And if you happened to further imagine that burrowing animals might be a threat to these locomotives and so have placed giant moles and stoats and turtles are huge monstrous beasts, well, then well done you, because I certainly wouldn’t have imagined it before reading this book. I do love it though. 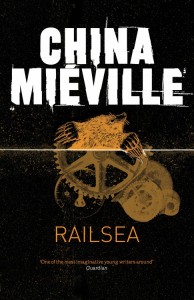 Sham ap Soorap is out on a moler’s ship. This is his first voyage on the Railsea, he is the doctor’s apprentice, although he isn’t entirely sure that this is what he wants to spend his life doing. The captain of his train, the Medes’ captain is a captain with a “philosophy” that is, an obsession. Many hunters have them. Her’s is the great white mole. And if you can see ever so slight echoes of Moby Dick, well, yeah, that is kindof obvious. And that isn’t the only literary influence on this book. There are pirates and salvagers, molers and warengines, excitement and orphans. All packed into the one book. It really is great fun.

However, it does take a little while to get going, and the narration is, well, idiosyncratic to say the least. Personally I really enjoyed it, but I could see some readers not liking the & instead of and, and the little interlude chapters could be taken as irritating rather than entertaining. Horses for courses and all that.

I don’t think this would count as my favourite Mieville novel, I really enjoyed it, and I love the idea of it, but I still think, that for all its flaws The Iron Council is my favourite. This is more than entertaining though. And I love the cover. All his books have been reissued with this style cover in the UK market and I think that they look fabulous.

Other reviews: Things mean a lot ; Capricious reader ; The Readventurer ; The Wert zone