In Barcelona a young boy is brought by his father to a secret place, The Cemetery of Forgotten Books. He is told he may take any book he wishes. That whatever one he chose; will be his to protect. He finds a book by an unknown author, Julián Carax, called The Shadow of the Wind. This book will change his life.

He reads and rereads this book. He loves it, and wants to find out about the author. But the more he finds out the more the mystery of Carax grows. Who is this mysterious man who buys up and burns all the books by Carax that he can get his hands on? And why are is much feared and hated Captain Fumero of the secret police after Carax. 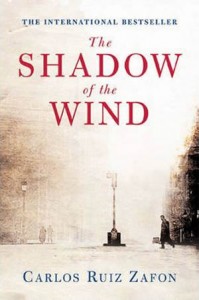 The shadow of the wind by Carlos Ruiz Zafón

I have had this book on my TBR list for ages. It has been sitting upstairs on a bookshelf for more than a few years. And people kept recommending it. And then I saw mention of its Cemetery of forgotten books and its gothic mysterious nature and I thought that this would be perfect for this year’s RIP event.

But I’m afraid I wasn’t as enamoured of it as others have been.

I liked it. I enjoyed the story. But I never once found myself loving it. I didn’t particularly like Daniel Sempere, the main character and narrator, he never came alive for me. I was a little engaged by the story, but the whole story within a story didn’t really work well. It jarred me out of one story and into another, they just didn’t flow together well.

And I was irritated by the fact that all the women seemed to be there to act as motivation for the *real* characters, the men. Virtually every woman was there to make “her man” suffer. Or to suffer to make him act, or not act, as the case may be.

It isn’t a bad book, and there are plenty of people out there who love it, so if you are thinking of reading it don’t let this review put you off. It just wasn’t my cup of tea. It did however fit quite well as an RIP read, it was atmospheric and dark, with elements of danger. I thought the “devil” character was great to start out with, and Fumero was just a plain evil bastard.