The smell and noise and confusion of a hallway full of boys can be quite awful at twenty past seven in the morning.
–Charlie Higson - Silverfin

Book 1 in the Young Bond series.

James Bond has just started Eaton College. It’s a huge change, so many other people around and rules to follow. He does his best to fit in and soon enough he makes a few friends. He also meets a few enemies, George Hellebore in particular seems to have it in for James. Their rivalry culminates in the running of the “Hellebore Cup”. Devised by George’s father, Lord Hellebore, it involves shooting, swimming, and running. Lord Hellebore expects his son to win. He demands it of him. But things don’t go to plan for the Hellebores. 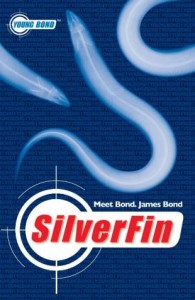 And no, Bond doesn’t win, but he does enough to ensure that George doesn’t.

And soon enough it is time for a holiday, and James heads off to Scotland to visit his aunt and uncle. On the long train ride north he meets up with a Londoner a few years older than him who is travelling to the same village in search of a missing cousin. He also discovers that George Hellebore is heading for the exact same destination. But the Hellebores couldn’t have anything to do with the disappearance, could they?

This book was exactly what it should have been. A fairly quick-paced, action filled adventure story with a bit of mystery thrown in. Bond isn’t quite saving the world yet, but he does have some crazy megalomaniacs to contend with. I’ve never read Fleming’s original books, so I’m sure on the character of the adult Bond so I won’t compare the too. I will say that Higson managed to get at least one ridiculously named female character into the book, Wilder Lawless how are you! so at least he kept with that tradition.

It is slightly episodic, in that one adventure happens and then another and then another, but for the most part they tie together quite well, and all work towards the story as a whole. So all in all an enjoyable, if not too demanding read.