On an island, all alone, the narrator, Bran, lives out his exile. He has been here ten years, time carefully marked out. He is kept busy each day by the struggle to survive, but also to report and note everything about this island. How fast it is being eroded. How long the trees and the peat will last. He records everything. For what purpose he isn’t quite sure. He knows the island won’t last too long. He gave it around twenty years, that is long enough to last him until the end of his days. Probably. 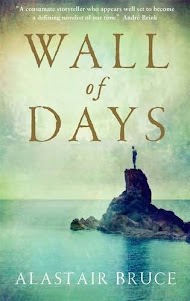 But then one day he finds a coat washed up on shore, and then suddenly, he is forced to re-evaluate what he should do.

Up until now he has accepted his banishment. He doesn’t agree with it, not entirely, but he is a man who follows the rules and the laws, and so he has accepted this exile. But now, maybe it is time to return home now.

I’m left feeling very ambivalent about this book. At first I didn’t like the narrator at all. He was too confident, too secure, too convinced that what he had done was the right thing. Bruce did a very good job of portraying him as a “great man”. I use that term not to agree with the definition, but more as an indication of how Bran saw himself. And a great man who was wronged.

Or, like me, an exile, a visionary, a leader of men fallen foul of changing sentiment, banished to take his chance on the high seas. More sinned against than sinning. (pg. 36)

But as Bran’s story develops he comes to realise that he isn’t so sure after all of what he did.

Guilt is the theme of this novel. And how we deal with our past. Do we hide away from it? Do we defend our actions? Or do we try to reconcile what happened with morals.

Bruce is a South African author, so I’m guessing that a lot of these issues would have been prompted from stuff like the truth and reconciliation programme. And in a way it ties in with a lot of my objections to Martin McGuinness running for president here in Ireland. I would have had huge problems if he had been elected, just as I have with any other member of Sinn Fein. It isn’t that I think that the other political parties here are any better, not really. And of course terrorists, or rebels, or freedom fighters, or whatever term you want to use, need to be included in the political process if a country is going to move on. But the issue for me is that first of all the past has to be addressed. Brushing it and the actions that individuals and groups did under the carpet, or trying to pretend that they don’t matter because it was in the past and that’s over with, that doesn’t work. The truth should out. Even if it is painful and horrible. Because it is the truth, and you have to acknowledge that before you can move past it.

So how does the book handle this? Well, it works really well, up until the ending. Which to me was very unsatisfying. Maybe it was a realistic ending? And throughout the book there were plenty of interesting questions raised. I mean, does the practical really outweigh the moral?

And I never came to like Bran, but I did come to understand him a little better, and to be able to empathise with him. Even if I think he was totally in the wrong.

Other reviews: Keeper of the snails