For years now Jackson Oz has been tracking animal attacks on people. It started out as a joke, but as the data kept coming in he began to think it was more than that. He has even named the phenomenon HAC. Human Animal Conflict.

And it is getting worse. All over the world mammals are acting strangely, coming together in unusual groupings and attacking humans. When Oz manages to film a group of male lions acting in concert to overwhelm a tourist resort he knows that things are only going to get worse. But can he manage to convince the authorities to act and save civilization. 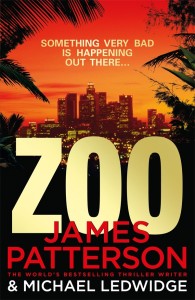 I’d never read a James Patterson book before, and as he is a very popular author I decided to pick this one up because the blurb made it sound somewhat like a horror and it would fit into my RIP reading. Plus, it is always good to try new authors, right? Well, not in this case.

It is badly written, lacking any characterisation, and development, anything but action. And even that is written so badly that it bored rather than entertained me. And the constant shifts from Oz’s POV to random other ones. Dogs, chimps, random people under attack. That’s fine if you write it well, but not if you use it with such a poorly developed story. Zoo feels like it was an idea thrown down on the page without so much as a second thought, let alone a rewrite or an edit.

How on earth is Patterson such a popular author? I know how he is so prolific, that’d be because he writes so many books *with* someone else. So do I blame Patterson or Ledwidge? Patterson gets first billing so I’m going to blame him, but I won’t be racing out to look for more Michael Ledwidge books either.

Other reviews: Always with a book ; Life is a story ; Just a lil lost ; WTF are you reading