Blue is the daughter of a psychic. A non-psychic in a family of those with the gift. But she does make things “stronger” or clearer. So she will often accompany them on their readings. Every year on St. Mark’s Day she goes with her mother to see the shades of the coming year’s dead. This year, however, Neeve, her aunt is the one making note of the spirits, not Blue’s mother. And this year Blue sees on of them.

This can only mean one of two things; the soon-to-be dead is her true love, or she will kill him. 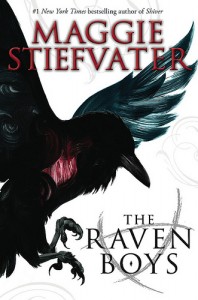 The Raven Boys by Maggie Stiefvater

I loved Stiefvater’s The Scorpio Races when I read it earlier this year. So I was hoping for more of the same from this book. Unfortunately I was disappointed.

It isn’t a bad book. In fact there is plenty to like Blue is a good character, she felt grounded and real. And all the boys had their own voice and character too. The writing is lovely and atmospheric as well. But something about it just didn’t grab me. It all feels like set-up to something else to come. And it is book one in a series, so I suppose a lot of this is set-up.

And I will read the rest of the series, so I guess it is a success in that regard, but if I’d recommend The Scorpio Races much more than this one.