The last of my RIP reads, and my All Hallows Swap book. 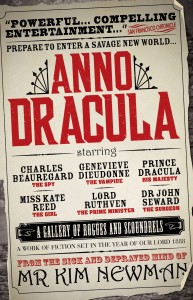 What if Van Helsing had lost? What if Dracula had won that battle, married Queen Victoria, and taken power? What would Victorian England make of vampires coming out of the shadows, into high society, and becoming fashionable as well as powerful?

Anno Dracula does just feature the cast of Bram Stoker’s Dracula though, there are numerous real historical figures walking about its pages, from Oscar Wilde to Jack the Ripper. And innumerable fictional characters too. So if you enjoy a good vampire story, mixed in with a detective story, mixed in with some historical fiction, with a huge ensemble of spot-the-famous-name characters then I think that Anno Dracula might just be the book for you.

Ana from Things Mean a Lot sent my this book as part of the wonderful All Hallows Read Swap. I was reading it over Hallowe’en, but didn’t quite get it finished on time. And then my internet connection went again so this is the earliest I could post my review & go check out what everyone else read. On the bright side, it did mean that my RIP experience went on for a little longer than I had expected :).

I’m so glad that Ana sent me this book, I doubt I would ever have picked it by myself. I’ve read some of Newman’s columns in Empire & SFX, but never been a huge fan. And just reading the blurb this does sound a bit like, “hey lets play spot the person you’ve heard of”, which it sort of is, but in a good way, not just a through as many names as possible on the page and see what happens.

The central storyline, Jack the Ripper and the quest to catch him is tied in to vampires and their impact on Victorian society. And ties back to Dracula quite neatly. That isn’t a spoiler, btw, because the reader learns very early who Jack is, we just have to wait for our heroes to catch up.

It is a gripping story, very easy to read and just keep on reading. A page-turner that means I will have to get my hands on the rest of the series, because while one aspect of the story does come to an end, there is much much more I want to know.