Long long ago, in a valley in the Andes, a group of settles were cut off from the rest of the world. They didn’t mind too much, they lived good lives and their land produced good crops. But a strange affliction caused their children to go blind. And their children’s children. And so on, until not one among them ever remembered sight or what seeing was. Into this land came Nunez. Once he realised that all this community was blind he began to think of that old saying “In the land of the blind, the one-eyed man is king” and of course he has two good eyes. Surely he will prosper here? 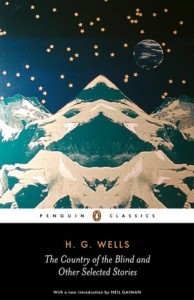 The Country of the blind – H. G. Wells

As you might have guessed, things don’t work out too well for poor Nunez. This community do not need him, they have gotten along quite well for generations without seeing, they don’t even realise that they are missing one of the five senses. The village is arranged so that everyone can find exactly where they are going and things work very well. When Nunez comes among them telling them of the outside world and using unfamiliar words such as “see” they regard him as, well slightly insane and deluded. Instead of being regarded as any sort of superior they view him as the village idiot.

Gradually he comes to accept this place in his new home, but when he wishes to marry the father of his prospective bride is not too happy with his daughter marrying a fool. But maybe his delusions can be cured….

It a short story, one I really enjoyed. I’ll have to look out for more by Wells, especially as his work is available for free.