Another coursera course book, and another that fits with my reading for this years RIP project & for the 2012 Sci-Fi Challenge.

One wintry day in a small, quiet English village, a stranger appears. He takes a room at the inn and keeps himself to himself. But his intense privacy, the bandages he wears, and the way he never eats around other people all arouse the suspicion of the locals. They aren’t quite sure what he is, or what he has done, but they are positive he has done something, and the speculation and rumours grow and spread. None of them, however, come close to the truth. He is invisible! 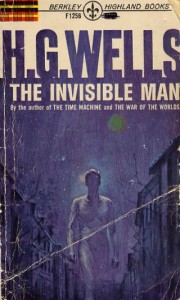 H. G. Wells’ The Invisible Man is a story the basics of which are known to many people. A scientist meddles and experiments, and succeeds in turning himself invisible. He thinks it will lead to all sorts of advantages for him. Of course he soon discovers that there are more disadvantages that advantages, and he is unable to turn himself visible.

It is a story of selfishness and madness.

And it is one of the founding books for the “mad scientist” trope. Frankenstein may have created a monster, but he wasn’t insane, just irresponsible. Dr. Moreau & Griffen, H. G. Wells’ characters are selfish and think of nothing but themselves. They are not the mad cackling men of popular culture, but they are still, to my mind, mad in that they pay no mind to society and other people. They think only of themselves and what they can get out of a situation. I’d be tempted to say that they probably come out of a conservative view of the world, in that they suggest that men are inherently inclined towards evil, and only society’s pressures and rules keeps people on the straight and narrow. I’m not sure I agree with that, but it certainly explains these books.

And although the central story here shares some similarities with The Island of Doctor Moreau the tone is utterly different. There the horror and the craziness was visible from the outset; here it is a much more restrained horror. It reads almost like a cosy mystery, with the strangeness being all the stranger because it occurs in the known and the usual, it happens in England, not in some foreign exotic island.

It is a solid read, and very entertaining, and I am glad I read it. I’m not sure if I’ll ever reread it though.